My parents' wedding in colour 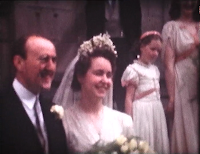 Hubert Gent married Margaret Luke on July 5th, 1948, the very day the NHS was started.  Though I believe there were no calamities on the day that resulted in the new service being used.  The reception was held at the North British Hotel, much later criminally renamed the Balmoral.    Since my grandfather had bought champagne and didn't like the corkage charge at the hotel, a second reception was held at their house (if I've remembered this right.)

Astonishingly for the time, a friend took a colour film of the event.    A gallery of snapshots from the film is on flickr.
Posted by Ian Gent at 18:45