This is an ex wall. 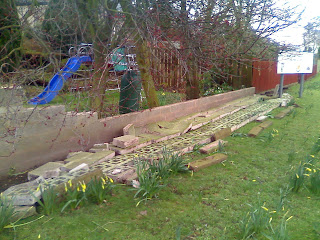 This wall has ceased to be.
This is what we saw on Wednesday morning. We kind of like having the ability to step out onto the riverbank. But it's hard work getting all the bricks out of the way. Luckily we have a tip about 200 yards away and a neighbour with a wheelbarrow.
The blocks with holes are serving a new role as stepping stones in the garden. I dig them in so their ugly concreteness is not visible, then they are great for stepping on. Either you can get from a to b, or you can do a bit of weeding or planting without stepping on plants. Things can grow through them too because of the holes and they won't affect drainage. Of course weeds might come through them, but they are not concreted in so in the worst case, pull it up, weed, repeat.
Posted by Ian Gent at 08:11 No comments:

This year's weed is bluebells. A lot of them were dug out in Autumn, but there's still a bunch there. I've discovered that I can tell the difference between snowdrop leaves and bluebells by touch. Bluebells have a rubbery feel whereas snowdrops are more whispery.
Why weeds? They are bullies, they are invasive, and the ratio of prettiness to leaves and groundcover is low. And they are Spanish Bluebells, not the native kind. Anyway, even native bluebells should be in a drift across a hillside under woods.
There's a shaded area which has a lot of bluebells and crocosmia. Crocosmia is this year's Enemy Number 2. In this area there is also a lot of snowdrops. Now the bluebells are getting out, I'm using this as a kind of nursery for snowdrops. I'm transplanting out some to other parts of the garden and leaving enough to grow some more for next year.
Posted by Ian Gent at 08:03 1 comment:

25 Random Facts about me.

I got this idea from Deborah Underwood.

1. I nap almost every afternoon, usually for about 20 mins to half an hour. If I can't take a nap for some reason, I'm often a little out of sorts. I can also nap in the morning or evening if possible.

2. I had over 15000 emails in my inbox, which is fine because search in mail is good nowadays. [Update: this is not true any more, sadly].

3. I have a hard time getting to sleep unless I'm listening to an audiobook, usually Agatha Christie, but sometimes Dorothy L Sayers.

4. I was a big fan of the British sci-fi comedy Red Dwarf until it started getting too unfunny, and Christine Kochanski was not played by whatsername.

5. I think if everyone listened to Flanders & Swann, the world would be a more civilized place.

6. Facts 1 to 5 are adapted from Deborah Underwood, my sister in law.

8. Just now I don't really want to go back to work full time.

9. The best part of my job is talking to clever people I like about interesting things.

11. I like playing Patience (Solitaire in US.) Especially on a computer to avoid laying the cards out. I love games where you have to do counterintuitive things to win.

16. I once found a self help book which helped me!

17. My Dad had 9 papers in Nature. I only found this out after he died. I said "If I'd known this when he was alive I'd have had to kill him."

18. I once asked my dad why he didn't take up radio astronomy as a lecturer. He said "I wasn't good enough." Yeah, right.

19. I often say that the most beautiful thing I own is my Curta Calculator. (Google it.) To be clear, I don't own my wife or children.

20. I like the feeling of "flow" when you are concentrating on something. That's not the same thing as being good at getting into it, or indeed doing the thing that will get you into the flow when you are doing something stupid.

21. I dislike living in an untidy house and office, but only rarely get round to tidying. Which is a pity.

22. Throwing out old stuff you really don't need can feel GREAT. Like recently I threw out my old notebooks from when I was a PhD student. It felt great.

23. You are allowed one self refential fact in every list of facts about yourself. Especially near the end when you are out of ideas.

24. I would like to be better at keeping in touch with old friends.

I was pretty happy to have 18,000 mails in my inbox. Because I use search to find what I need instead of folders.
Unfortunately I just realised it's slowing down operations, e.g. when I start mail it tries to sync my work and offline copies of the mailbox, which takes a long time.
So I've deleted all mails from 2006 to 2008, leaving me only 3,000 there.
I'm sad about this, because the bad design of the software means I have to have the mailboxes organised a different way to what I want.
Posted by Ian Gent at 08:01 No comments:

How Not To Become President

How Not To Become Prime Minister

How Not To Become Prime Minister?
Hold a great office of state other than PM in a Government that loses an election.
Remember from my last post, that the following leaders of the opposition have become Prime Minister since the war:
Attlee, Churchill, Wilson, Heath, Wilson again, Thatcher, Blair.
Churchill and Wilson the second time had obviously been Prime Minister before. But none of Attlee, Heath, Wilson the first time, Thatcher or Blair had served as Home Secretary, Chancellor, or Foreign Secretary previously.
Bad news for Miliband and Jacquy Smith and Alistair Darling if Labour lose the next election.
Posted by Ian Gent at 13:12 1 comment:

How To Become Prime Minister?

Here's a thing that occurred to me while watching "Margaret", the BBC drama about the downfall of Margaret Thacher. Since the war, if you want to be Prime Minister, you are better off hanging around as a senior person in the Government, than by being leader of the opposition.
To see what I mean. Since the war, the following leaders of the opposition have become Prime Minister:
Attlee, Churchill, Wilson, Heath, Wilson again, Thatcher, Blair.
Of course second Wilson, but also Churchill, had been Prime Minister before being leader of the opposition. Leaving:
Attlee, Wilson, Heath, Thatcher, Blair.
The following have succeeded a sitting Prime Minister who has left for some reason.
Eden, Macmillan, Home, Callaghan, Brown.
Indeed Churchill's wartime premiership started by taking over from a sitting Prime Minister of his own party.
So both lists are length 5, so maybe I'm overdoing it.
Posted by Ian Gent at 13:00 No comments: