How Cupar Food Bank Made Me Happy

I am incredibly fortunate that I have never had to go to Cupar Food Bank. Today I was incredibly fortunate that I went to Cupar Food Bank.
From Cupar Food Bank you can see my house. Though you can't see Cupar food bank from my house. Sounds impossible but the bits of my house you can see aren't the bits with windows.
I have passed it many times. Also, many times I have paid for my shopping at Tesco and passed the box that you can donate food in and gone "oops, forgot to buy any." I have occasionally remembered and donated a small amount of food to it. Food banks became a political football during the referendum. It was only yesterday that I suddenly realised what should have been obvious all along.  Food banks are not a bad thing, they are a good thing. It's the need for food banks that is a bad thing. Absolutely I believe that current UK government policy is a major factor behind the need for food banks. Benefits penalties, forms you have to fill in online when not only the £300 computer but the £3 bus fare to the library might be impossible. But I don't believe the need for Food Banks will ever be zero.
You're a woman with an abusive husband and two toddlers. You take them for a walk in the park, maybe the beautiful park between my house and the Cupar Food Bank. You decide you can never go back. You can't even risk going back for your handbag. What are you going to eat tonight? What are your children going to eat tonight? If your baby is in nappies, where is the next one coming from? If they're out of nappies what are you going to wipe their bottom with tonight?
This is the kind of problem the Cupar Food Bank deals with on a daily basis - they deliver food to the refuges and safe houses in Cupar so that the women don't have to come out at risk to themselves.
It had literally never occurred to me that Food Banks need to provide nappies and toilet paper. But it occurred to them and they do it because they are wonderful.
Rewind.
Because the referendum moved me so much I decided to donate my modest winnings gambling on it, and the stake, slightly less modest, to the Cupar Food Bank.
I looked online and watched the video (not of Cupar) there. Everything is about no shame. There is no shame in going to the food bank. It's not an easy thing but the hard part is needing to go there. It's not your fault that you need to eat. I was incredibly moved by the bit where somebody said to them "You saved my life", they say "Well I mean thanks but it's just a bag of food" and he says "No, I mean I was going to kill myself. You saved my life."
So I decided donating to Cupar Food Club was a good idea.
Picked up my daughter from After School Club and stopped off at the Food Bank. I asked if I could give them some money. Not to my total surprise, they said yes.
I thought we'd be in and out in a couple of minutes. We were there about an hour. A wonderful hour that made me very happy.
We had a cup of tea and juice for Sophie. A jammie dodger each. I explained why I was there - because of the referendum - and we chatted about it and this and that. A couple of the volunteers quickly picked out our house and said extremely nice things about our new extension. Not guilt tripping about me having a nice house, just neighbourly interest.
They didn't offer us a biscuit because I was donating, it's because they offer it to everyone who walks in. People less lucky than me come in and shove half a packet down their throats. Just as they are starting to apologise for their greed (hunger) the volunteers ask if they'd like another packet.
Anyway, it's time for a tour. I think it's going to be a room with some food in it. Still think I'll be out in ten minutes.
The first room is where they sit you down if you are a client. They talk to me and my daughter like we were clients. Pro tip. Talk to an 11 year old like she's an adult. Guess how the pros at Cupar Food Bank talked to my daughter? "Wow, that's a house captain badge, were you chosen for that or elected?"....
What do you like for breakfast? Cereal or porridge? Cereal? Ok, yeah, most people say cereal. Tick that box. Do you like full fat or semi skimmed milk? Tick that box. 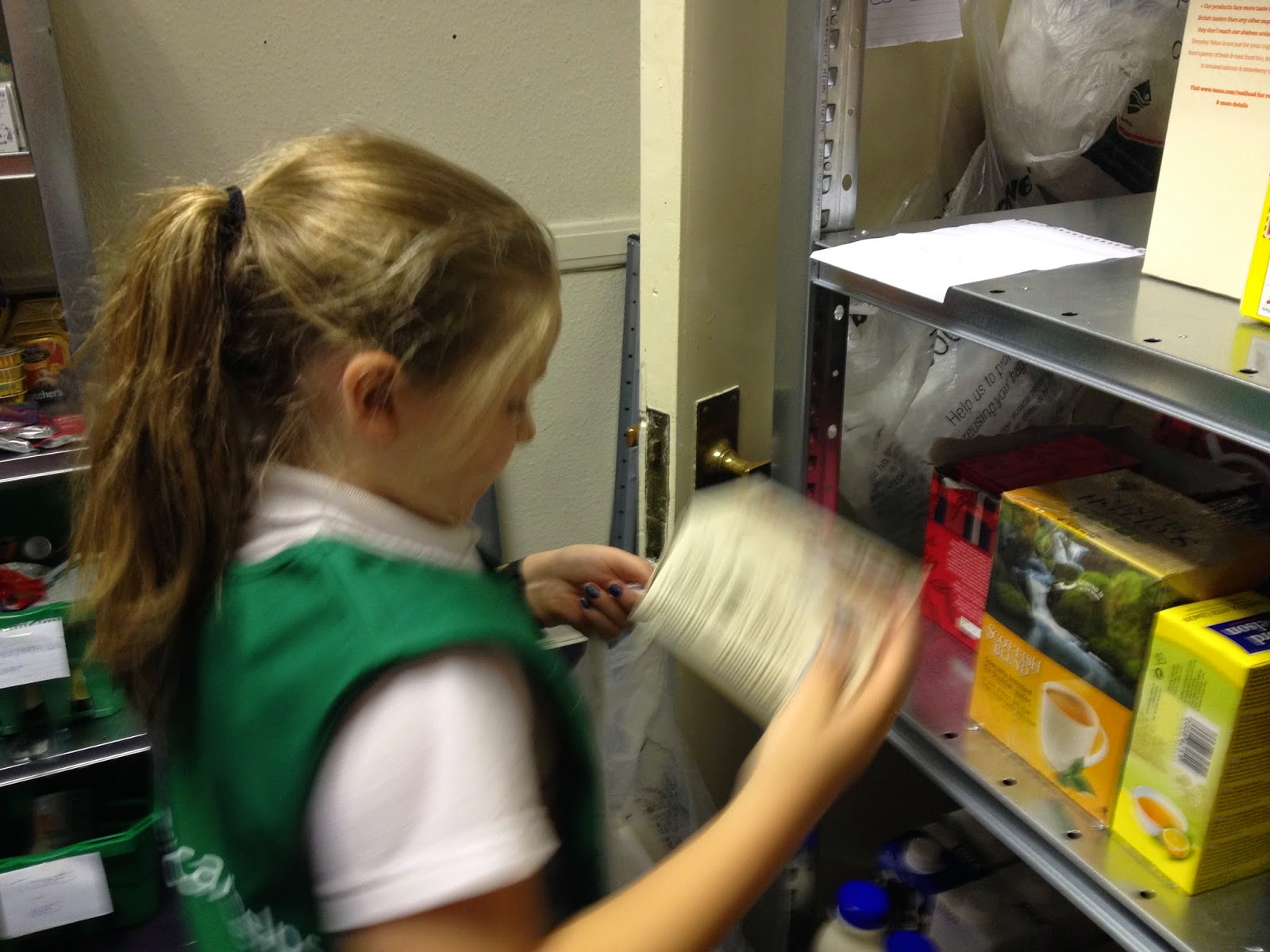 Do you like tea or coffee? Or both? Do you have sugar with your tea? Ok, tick those boxes.
What about the kiddy? What's his treat? Sweeties? Crisps? Once they had a two year old come in and mum said he loved tomato soup as his treat. No problem, here's some tomato soup.
And so on and so on and so on. Nothing is: you'll take this and be grateful. Everything is: you need food but you also need to be happy with what you are given. And by the way, do you have a can opener to get into these cans?  No? Here's one. That's a lovely dog, do you need dogfood?
That's the first room. The next room is where they pack the food. They've got the shopping list so they go next door and pack the bags.
Unless it's today and they ask if my daughter would like to help pack a bag. They shove an apron on her and she starts to pack. This family likes porridge. It's over there. They're a tea family, get that down from there. They like sugar in their tea. You can't reach? Let me get that for you....
Somewhere in Cupar or nearby, somebody maybe tonight is eating food that my daughter packed for them. It might be one of her classmates. If you can think of a better lesson in civics, let me know.
I'm off exploring more with another volunteer. There's another room with more food in it. The one my daughter is in is the supplies to be used up next. This is the one with longer term storage. It's on rotation, with each section labelled with the expiry date. Some things will be labelled October 2014, but there'll be jams labelled 2017. 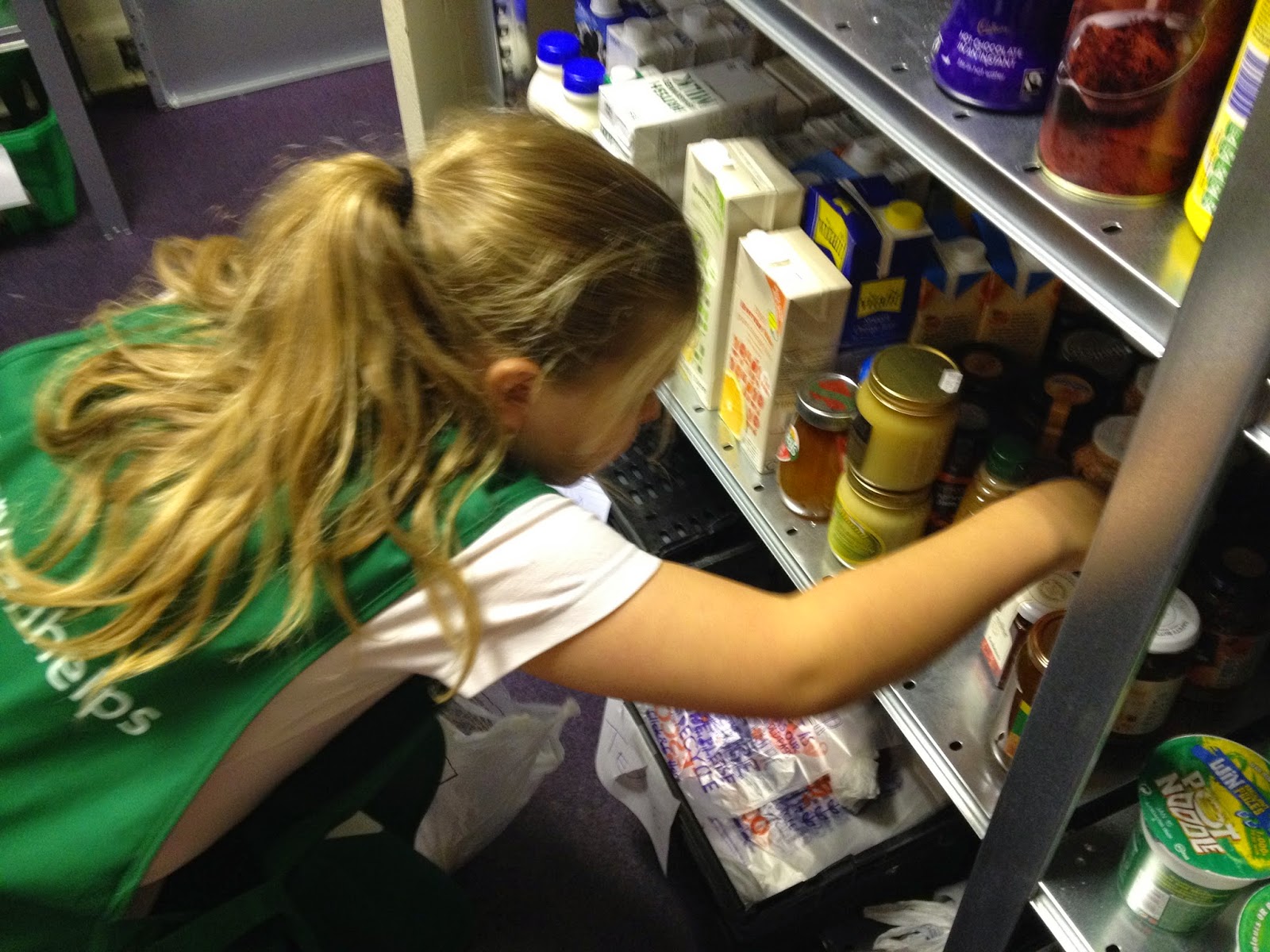 There's the milk - UHT of course. Sometimes we run out of milk. We email the churches and they get the word out to their donors so that our clients can have milk that weekend.
No nappies though. Too many sizes for it to be sensible to stock all the options. If somebody needs nappies a volunteer will pop to Tesco to get the right size. Remember that bin at Tesco in Cupar? As well as passing on the food, Tesco donates 30% of the value in cash. If they need nappies they've got that money to get them. Every little helps.
Saved the best for last. They get lots of plastic bags from all the shops, CoOp, Tesco, Lidl, whatever. If you go in to the Cupar Food Bank and leave with four bags of food, they are all bags from the same shop. If you pass somebody in the street they'll just assume you are walking back from that shop. Somebody. Thought. Of. That.
They didn't even tell me this. They told my daughter and she told me. I love my daughter so much. She is incredible.
Just like the people at the Cupar Food Bank are incredible.
While we try to get UK government's disgraceful policies changed, let's change the world we live in as well as the world we want to live in. And along the way let's make ourselves happier as well.
People talk about the "democratic deficit". But the democratic surplus from the referendum is just immense. Yes or No, I know you voted the way you did because you want a better Scotland. I say this:
Make it so.
And if you can't think of anything else to do, take your daughter to a food bank. It made me incredibly happy today.

If you need to go to Cupar Foodbank as a client, here's what you need to know. The Cupar Foodbank opening times are: Monday, 11am - 3pm, Wednesday  4pm - 6pm, Friday 11am - 3pm then 5pm - 6pm. You need to be referred by one of the front line agencies - but honestly, if it's too urgent for that, just walk in.  They'll help you get in touch with the right people.

If you are not local to Cupar, find your nearest food bank here: http://www.trusselltrust.org/map